Spine Surgery Through the Scope 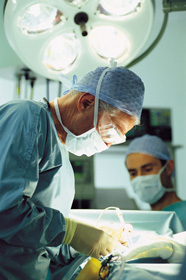 History - The first report of surgery to fuse a diseased spine was published in 1911 by Hibbs. Early results using what were primitive techniques were less than encouraging and spinal fusions fell out of favor. In the 1940's posterior (from the back) spinal fusions became increasingly recognized as valuable for certain diseases such as tuberculosis of the spine, and later for spinal deformity. In cases of scoliosis, patients were usually placed into a body cast that with the spine contorted in order to correct the spinal curvature to the extent possible. Once the plaster hardened, a hole was cut into the back of the cast overlying the spine. Surgery for spinal fusion was then performed through the hole in the plaster.

Anterior spinal surgery (from the front) for scoliosis was first performed in 1965 by Hodgson. Dwyer's anterior spinal instrumentation was developed in 1969. The approach to the front of the spine has typically been through an incision in the flank, or in the side of the chest. When the surgery is performed through the chest, a rib is often removed to improve access to the spine. This procedure is called a thoracotomy. The main long-term complaint patients have with a thoracotomy is pain in the surgical site. The scar can also be quite long.

The notion of operating on patients through a scope is not new. Jacobeus performed the first laproscopic surgery in 1910. The technique did not catch on until the 1980's when current fiber optic technology became generally available. Mack performed the first thoracoscopic spine surgery in 1992. Placing spinal instrumentation (screws, rods, or plates) into the vertebrae through the scope is being investigated.

Currently, there are several centers across the United States that have experience treating spinal disorders through the thoracoscope. There have been several observations as the technique becomes more wide spread. There is a certain "learning curve" for surgeons learning the technique. The first several cases take more time, have more complications, and the results may not be quite as good as when the surgeon has more experience. For most orthopedic spine surgeons who completed a general orthopedic residency, the skill required is in some ways similar to the skill of performing a knee arthroscopy. Most orthopedic spine surgeons learn the technique quickly. Some of the more common spinal conditions where this type of surgical technique might be useful include scoliosis, kyphosis, tumors, thoracic disc herniation, and fractures.

We have been doing thoracoscopic spine surgery for adults and children (youngest is 6 years old) since 1994. Some of the spinal disorders that have been treated in this way include:

We have noticed that the primary benefit to performing thoracoscopic anterior spinal surgery over the traditional thoracotomy is in the decreased level of post-operative pain. This seems to be a nearly universal observation. Patient satisfaction has been very high. Patients also prefer the several small scars to the single large scar, when given the choice.

When comparing thoracoscopic surgery to the same procedure performed in the traditional way (thoracotomy), we have not noticed a difference in the hospital time, time to return to work, or successfulness of fusion between the two procedures. The time it takes us to perform the surgery through the scope is the same as it takes us to do it "open". The amount of blood loss during surgery is also about the same.

As with any spinal surgery, there are major and minor things that can go wrong. The worst complications are also the most rare, including death, spinal cord injury, and major injury to the lung, heart, or blood vessels in the chest. Each of these would be expected to occur no more often than one in several thousand surgeries. More minor (and more frequent) complications could include infection, pneumonia, minor bleeding, prolonged need for a chest tube, incisional pain, numbness along an intercostal nerve distribution on the chest wall, and failure of the fusion (pseudarthrosis).

Thoracoscopic spine surgery is here to stay. This is not a passing fad. The early results treating several different spine problems have been acceptable, safe, and well accepted by patients. The number of surgeons trained in the technique is certain to grow as we collect more data on its long-term successfulness.

To request an appointment at one of our offices, call or click below.

Clinical research studies are fundamental to our mission.